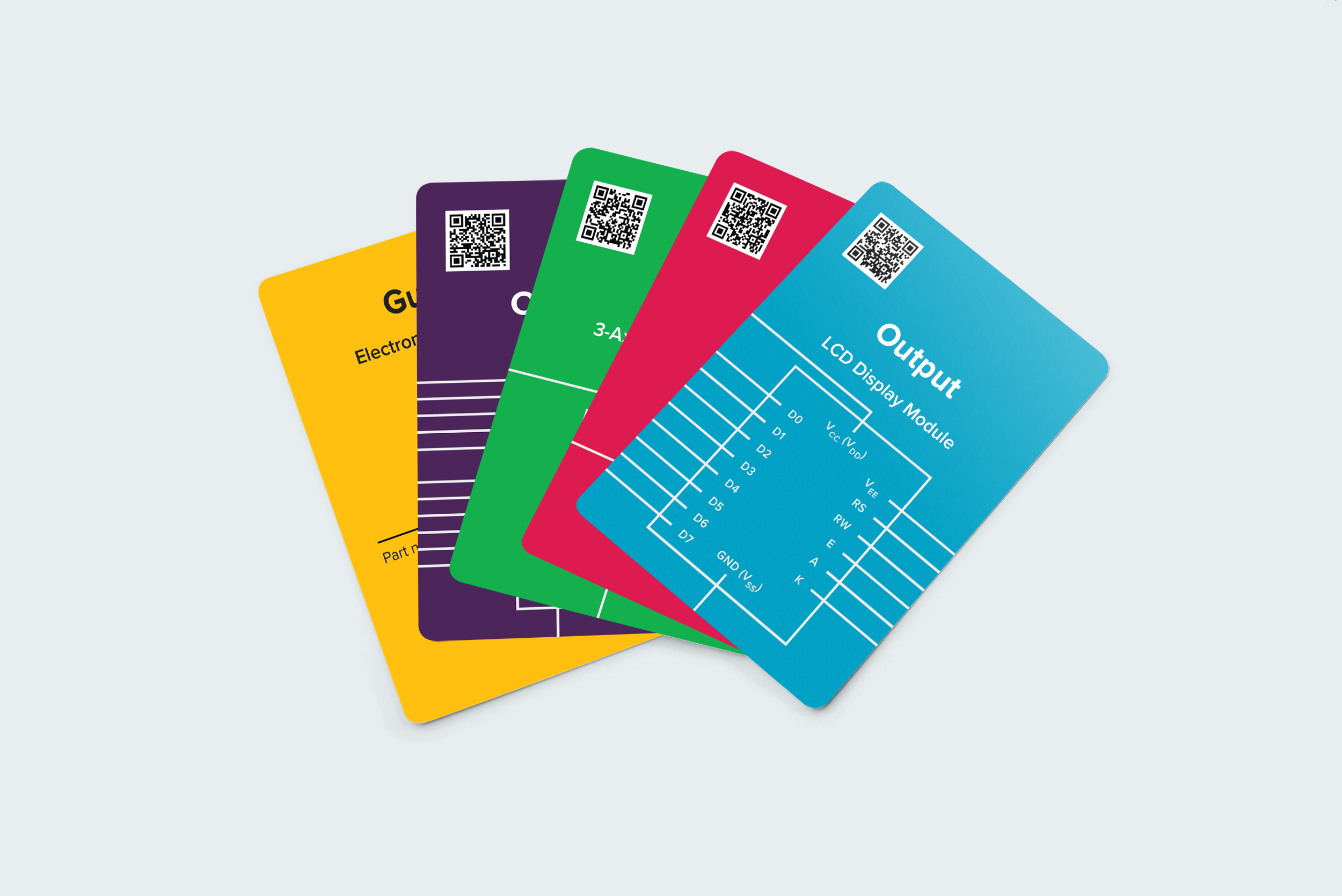 An educative card deck that paired with its web catalog supports student learning and instructor teaching of electronic components and circuitry. Funded by the National Science Foundation, as part of the Smart Spaces for Making research project.

Deployed in 4 sections of CMU's 99-355 Intro to Arduino course (50+ students), we investigate how this tool impacts student learning and professor instruction in maker-based classes, especially within a remote context.

The QR code and URL on its front and back links students to a reference page that offers further information on the component. Learn more about the web catalog here.

USER TESTING
INSTRUCTOR INTRODUCES
COMPONENTS THROUGH LAYERS OF ABSTRACTION
As a part of the introduction to the students' course kits, the instructor introduces each component alongside their respective card. Using a document camera feed, the parts and card setups were transmitted via Zoom.

Zach could quickly highlight general functionality and offer comparative visual depiction, and then flip over the card to show a high-level schematic depiction and low-level terminal connections.
"The system of schematic symbology became much easier to refer to, and manipulate, through use of the cards. I was also able to, in a similar level of abstraction, build up general ideas of how circuits are properly constructed, by using multiple cards alongside each other to show, for instance, that a stepper motor needs to be interfaced with the Arduino via a stepper motor driver; I just put the card in between the two to demonstrate how that would work." - Zach, instructor of 99-355 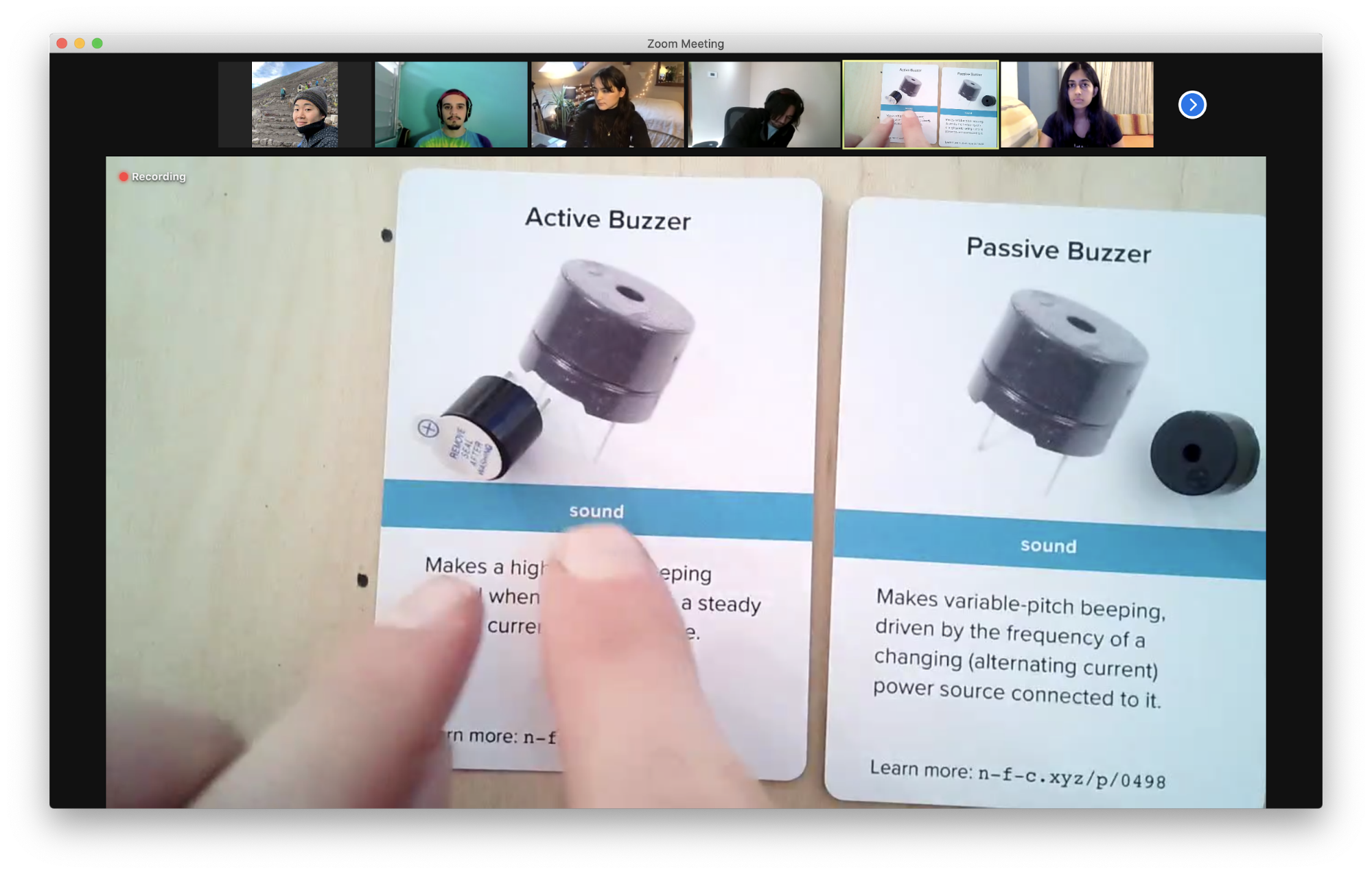 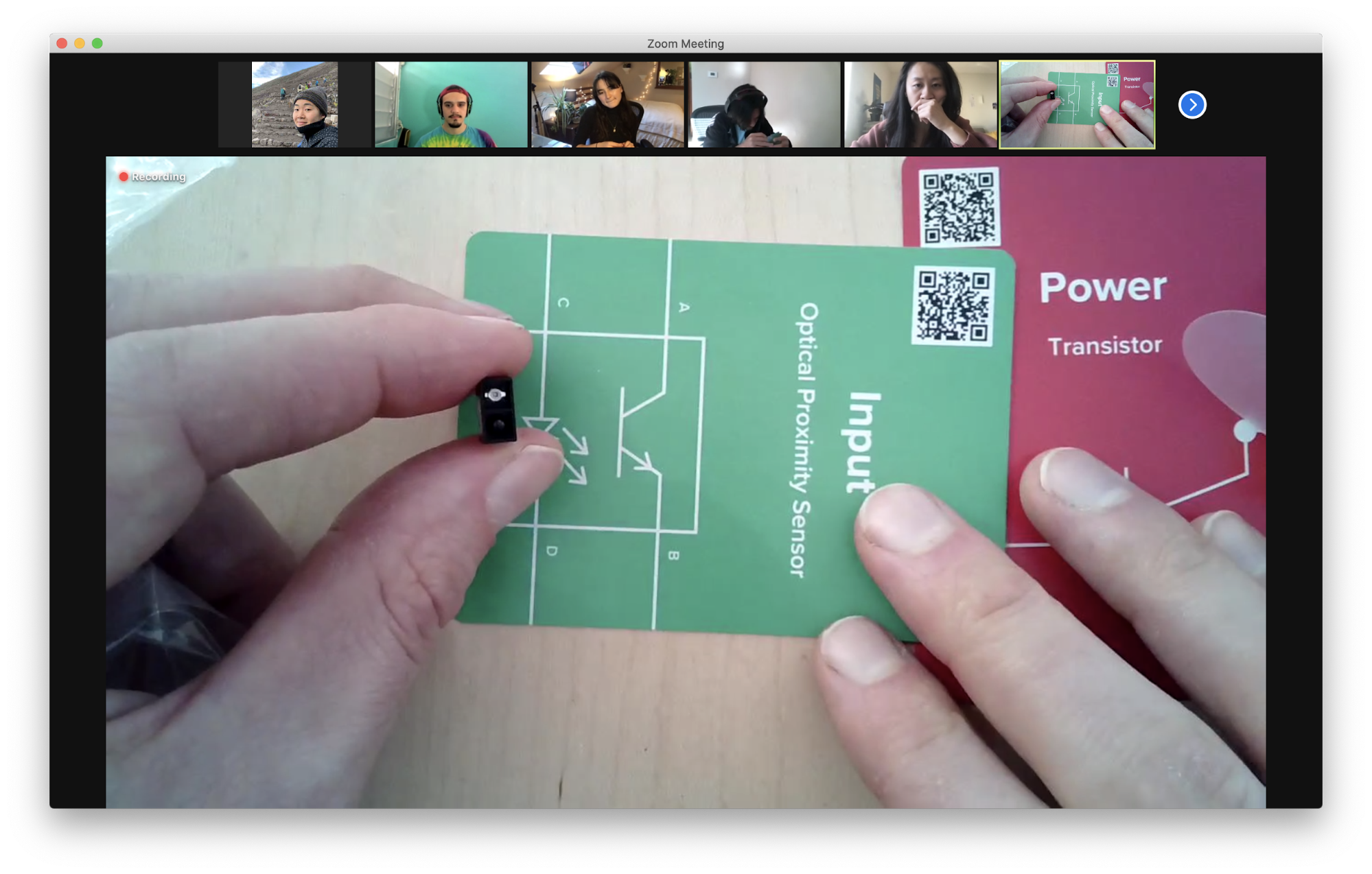 By placing the frontside of the MakerCard next to a component, the instructor was able to visually and textually reinforce his explanations of the component’s functions and features.
Using the backside of the card, the instructor demonstrates how a component’s physical pins corresponded to those represented in its schematic.
STUDENTS PRESENT THEIR CIRCUIT LAYOUTs FOR CRITIQUE AND DEBUGGING
In the second session the instructor introduced block diagramming and a project planning exercise using the cards. Students used the MakerCards to not only develop their ideas, but also communicate the circuit layouts via Zoom for feedback.

‍Cards Bring Contextual Information to the Forefront
Project plans and block diagrams demonstrated using the MakerCards were straightforward for beginners to understand and share. Even though the majority of the class was still gaining familiarity with electronic componentry, we observed that having contextual part information on view aided student comprehension and clarity of communication. Those students with cards had increased fluency with parts and in communicating their ideas.

Cards’ Rearrangability Affords Smooth Debugging
‍It was rather easy for students and Zach to tweak the card-based circuit diagrams. During the video call, Zach was able to highlight mistakes and illustrate misunderstandings by asking the students to rearrange cards. This increased understanding of abstractions and demonstrated opportunities and approaches to problem-solving.
"I could simply arrange the cards properly to illustrate an idea, knowing that the students were able to easily and quickly imitate me in doing that if they wished." - Zach 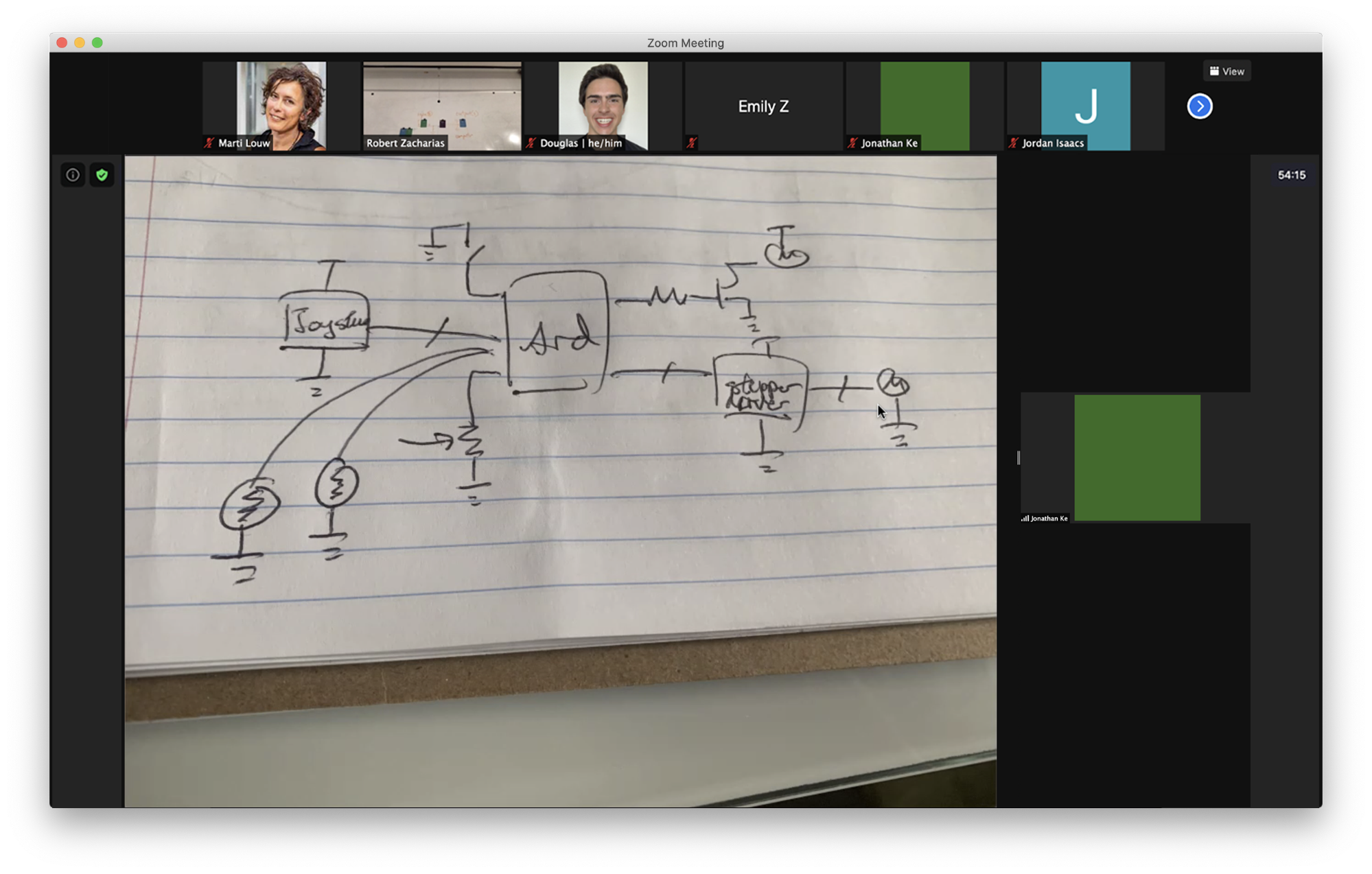 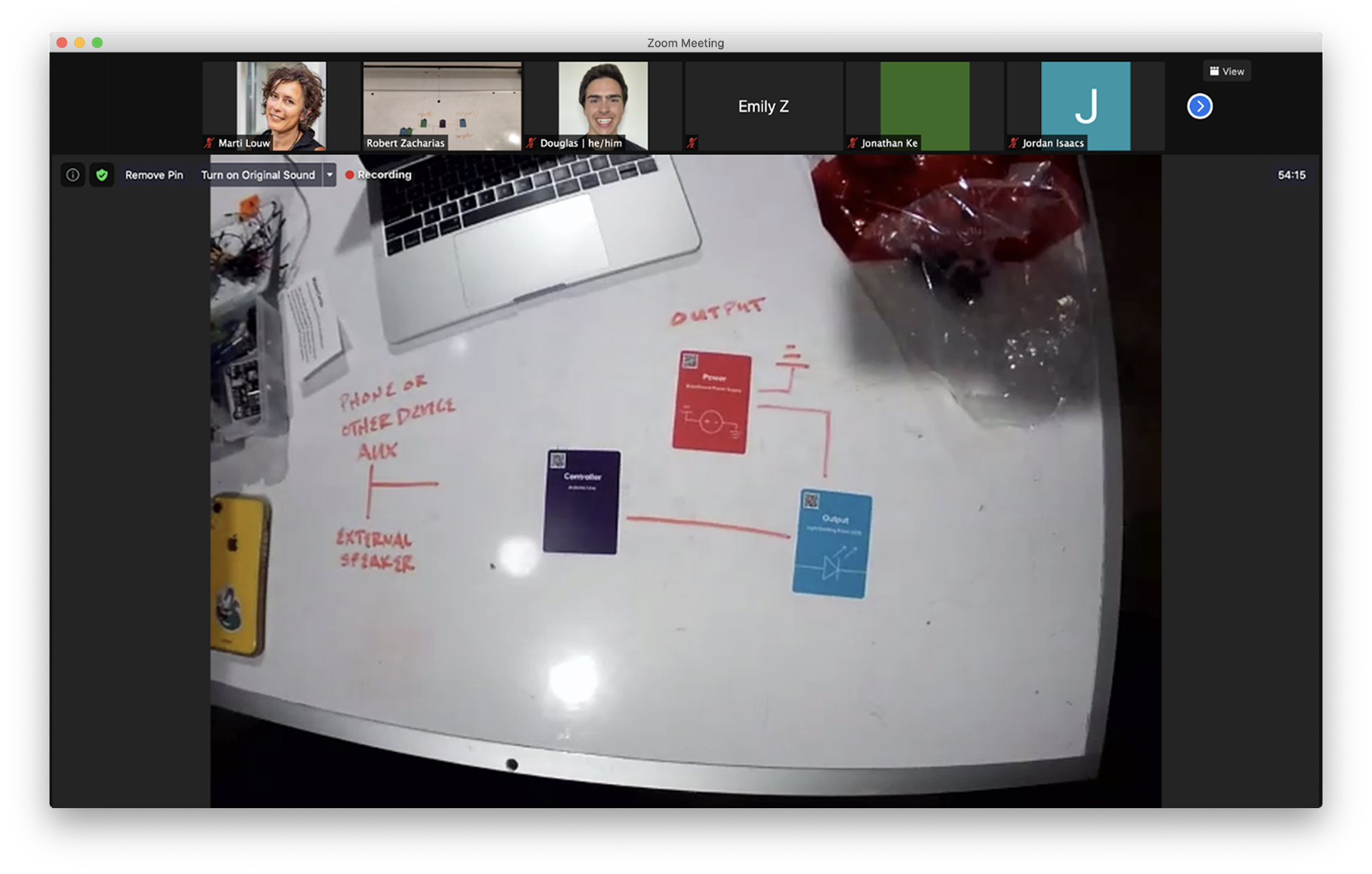 Ad Hoc Communication without MakerCards
Student with MakerCards
Research
SPATIAL ANALYSIS
Prior to COVID-19, we conducted a spatial analysis of an active maker-space on campus. We investigated how the physical organization of space impacts learning opportunities and social affordances. Maker-spaces have a high social capacity for direct and indirect collaboration as much of the physical work is exposed. 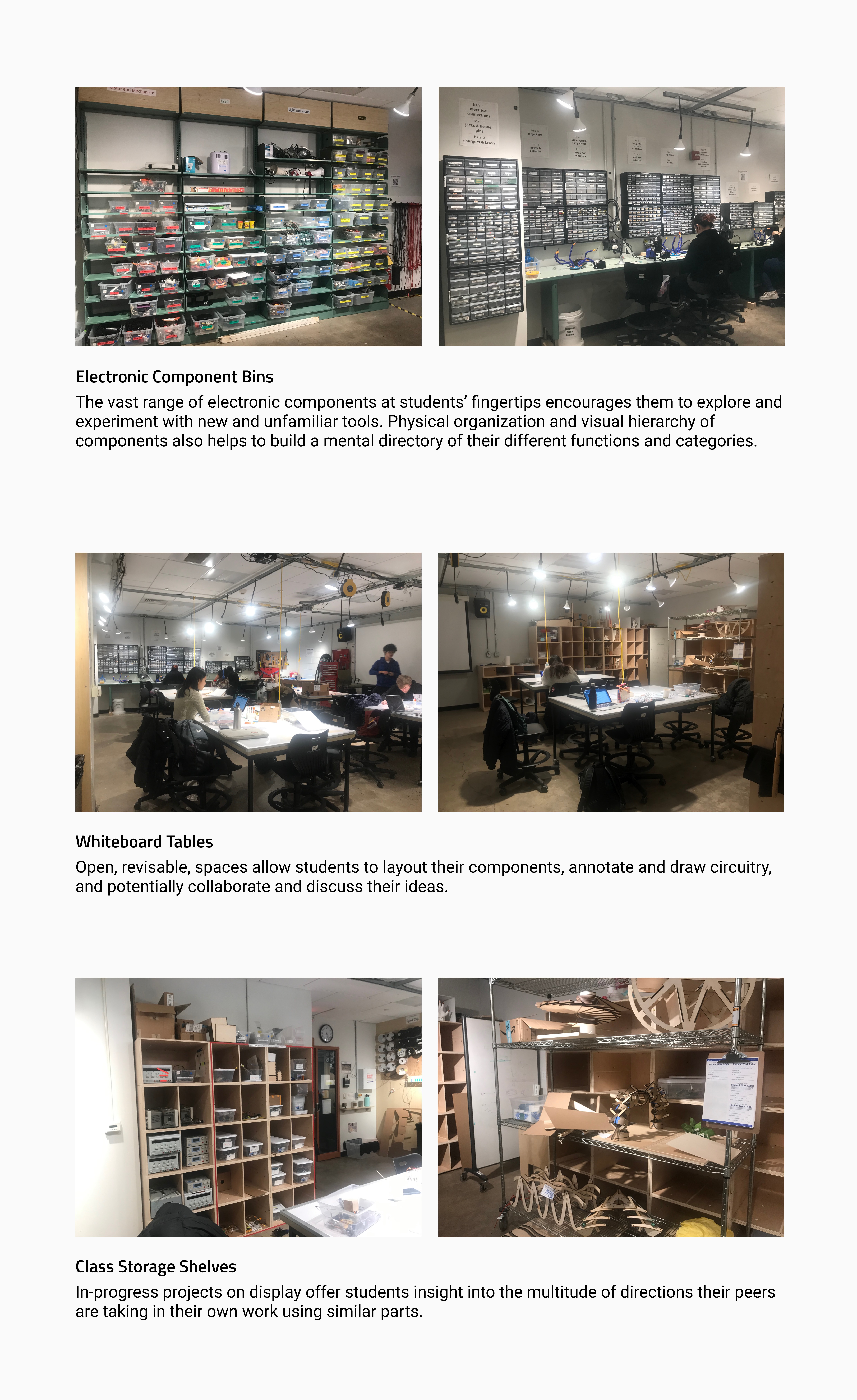 INTERVIEWS
We interviewed several students and the instructor to understand their goals and ambitions for the Intro to Arduino course. I then developed two personas for the typical students taking the course.

INSIGHTS
PROBLEM FRAMING
The course is usually set in the Physical Computing Lab, where students can freely work and directly access the facility’s wide selection of electronic components. Due to remote conditions, however, most students attend class with a setup consisting of a desk, a laptop or computer, and their course kit.
1. The range of a student’s exploration easily becomes limited to the components found in their course kit.

2. Supportive learning that usually occurs outside of class hours is missing as students work offline and asynchronously from the instructor and one another. 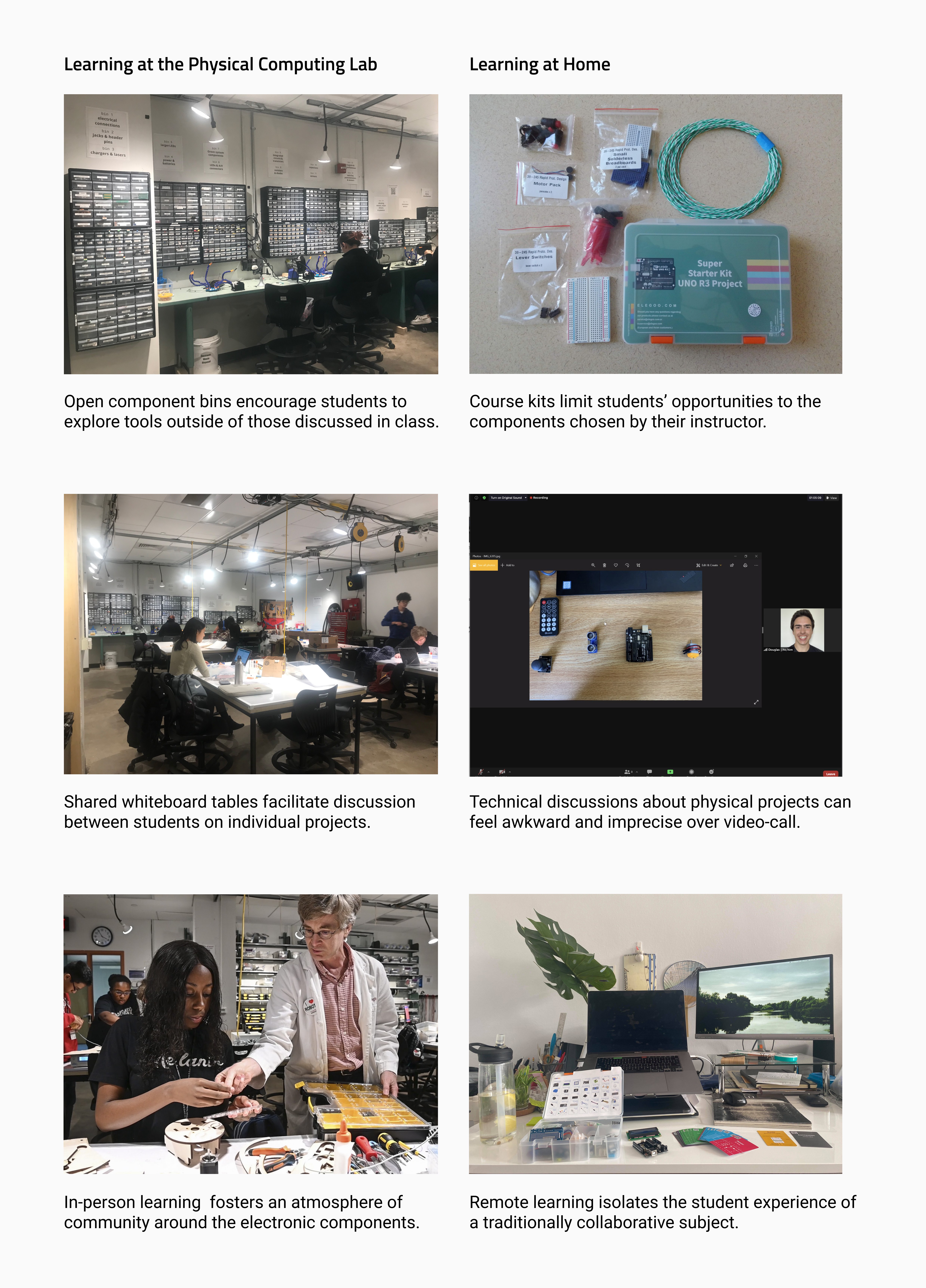 existing tools
+ OPPORTUNITY AREAS
I researched available tools in the adjacent space of IoT Design to understand their affordances for beginners in the course. On a 2x2 matrix, I charted their experience level and relevancy to implementation. Through this, I saw an opportunity to build a tool that supported beginners to electronics in circuit implementation. 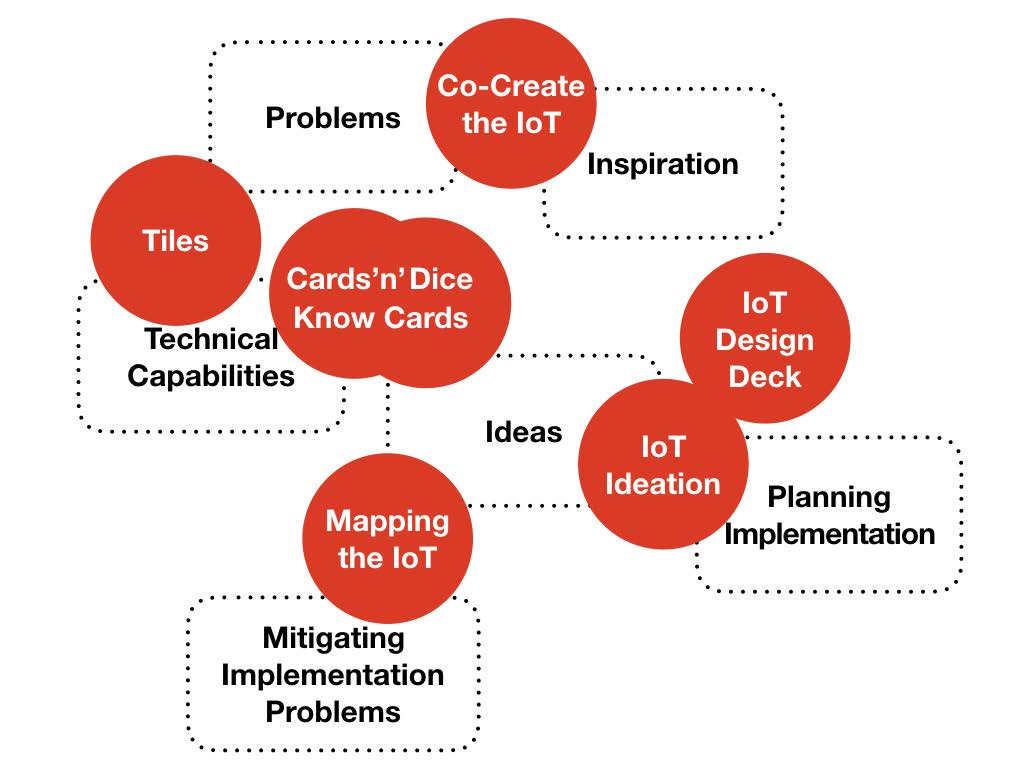 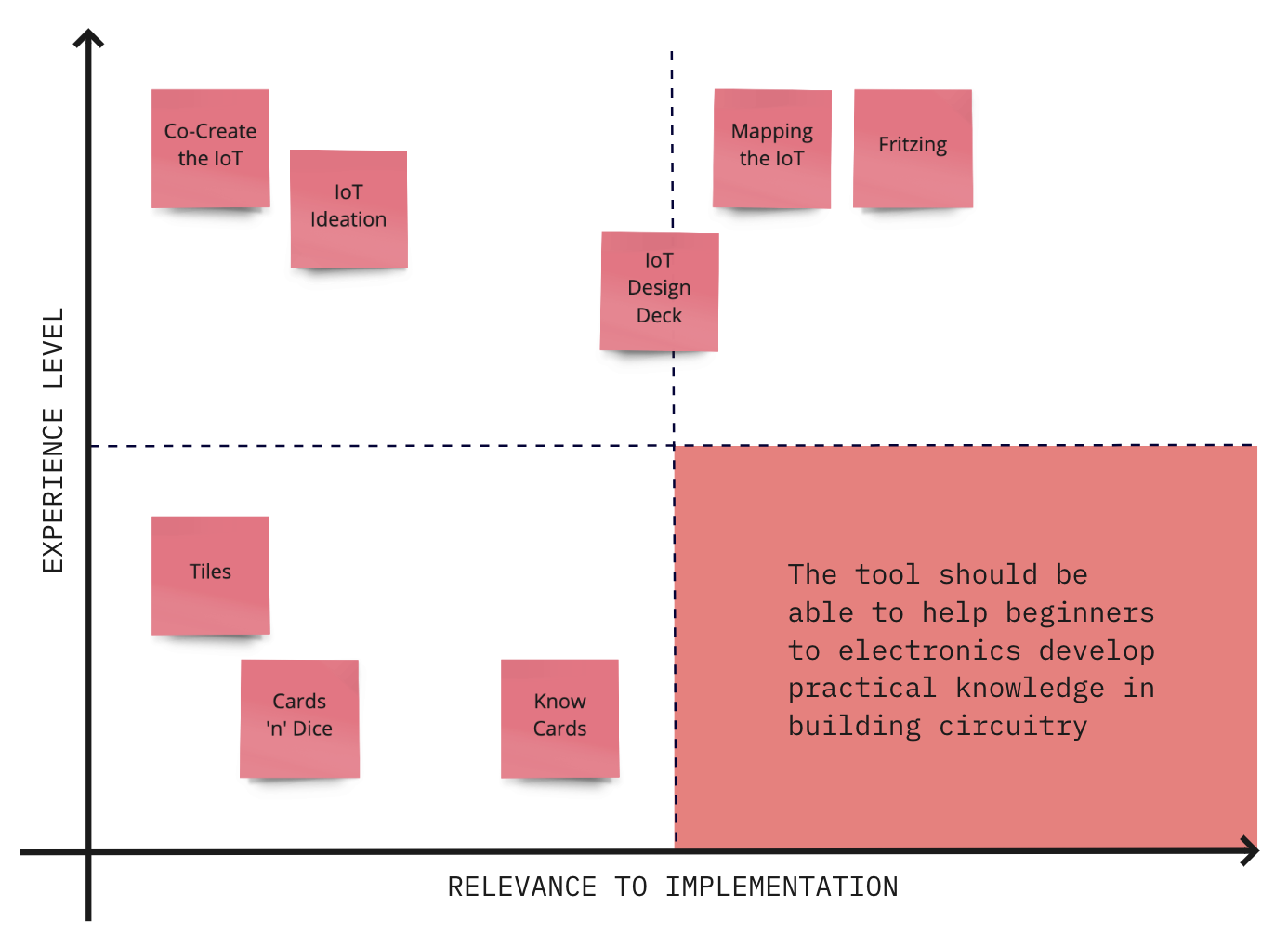 Figure from A Collaborative Landscaping Exercise of IoT Design Methods (A. Kurze et al.)
A 2x2 matrix I made to map the affordances of existing tools
Concept
We were very inspired by the handy and tactile nature of many of the research IoT tools. Card-based tools allow students to quickly rearrange components and
Process
ITERATION 1
Inspired by Tina Aspiala’s KnowCards, we began by customizing a card deck that would exist in conjunction with the instructor’s course kit. 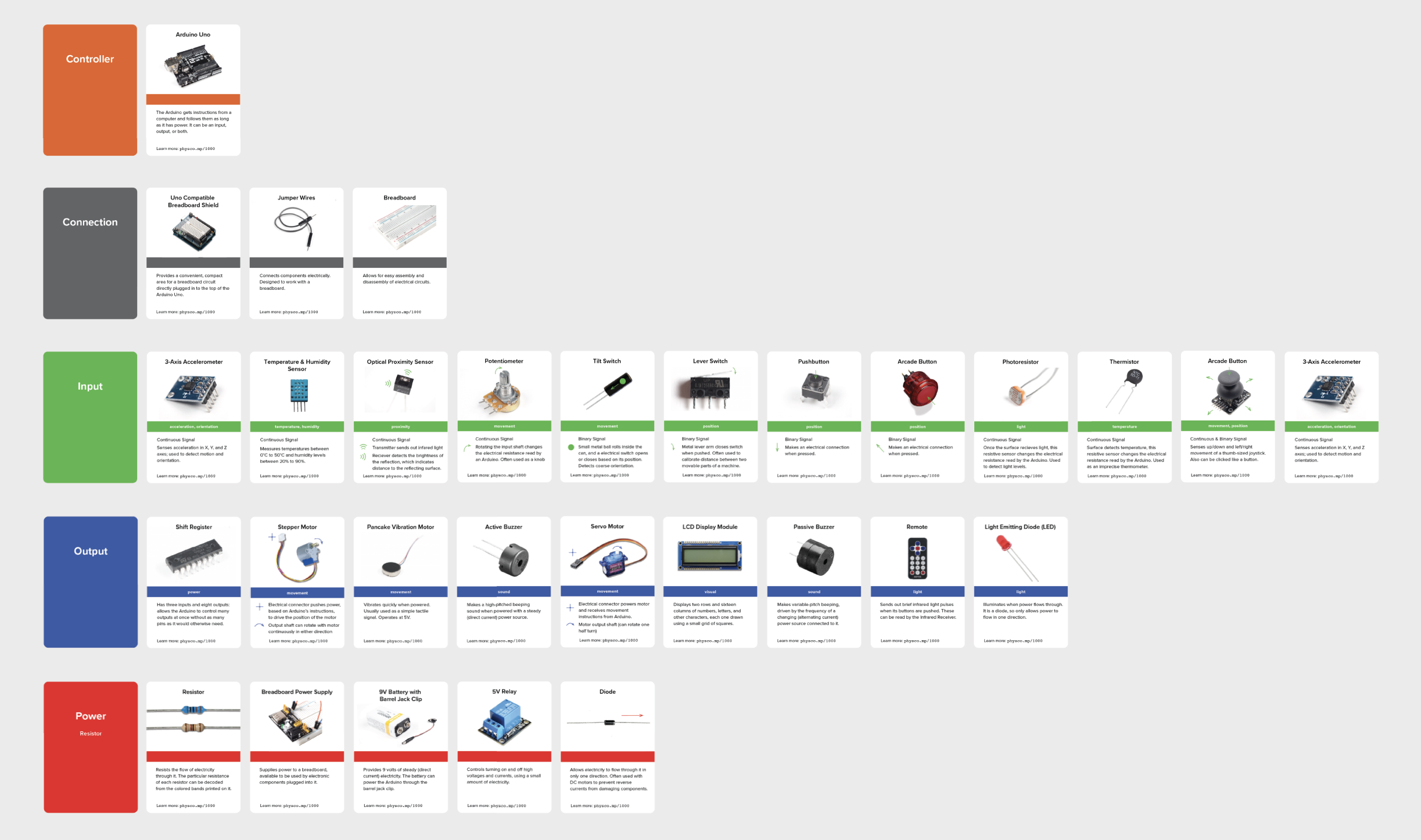 ITERATION 2
After speaking with Zach and several other instructors, I tested several iterations that included the schematic symbols of the cards. 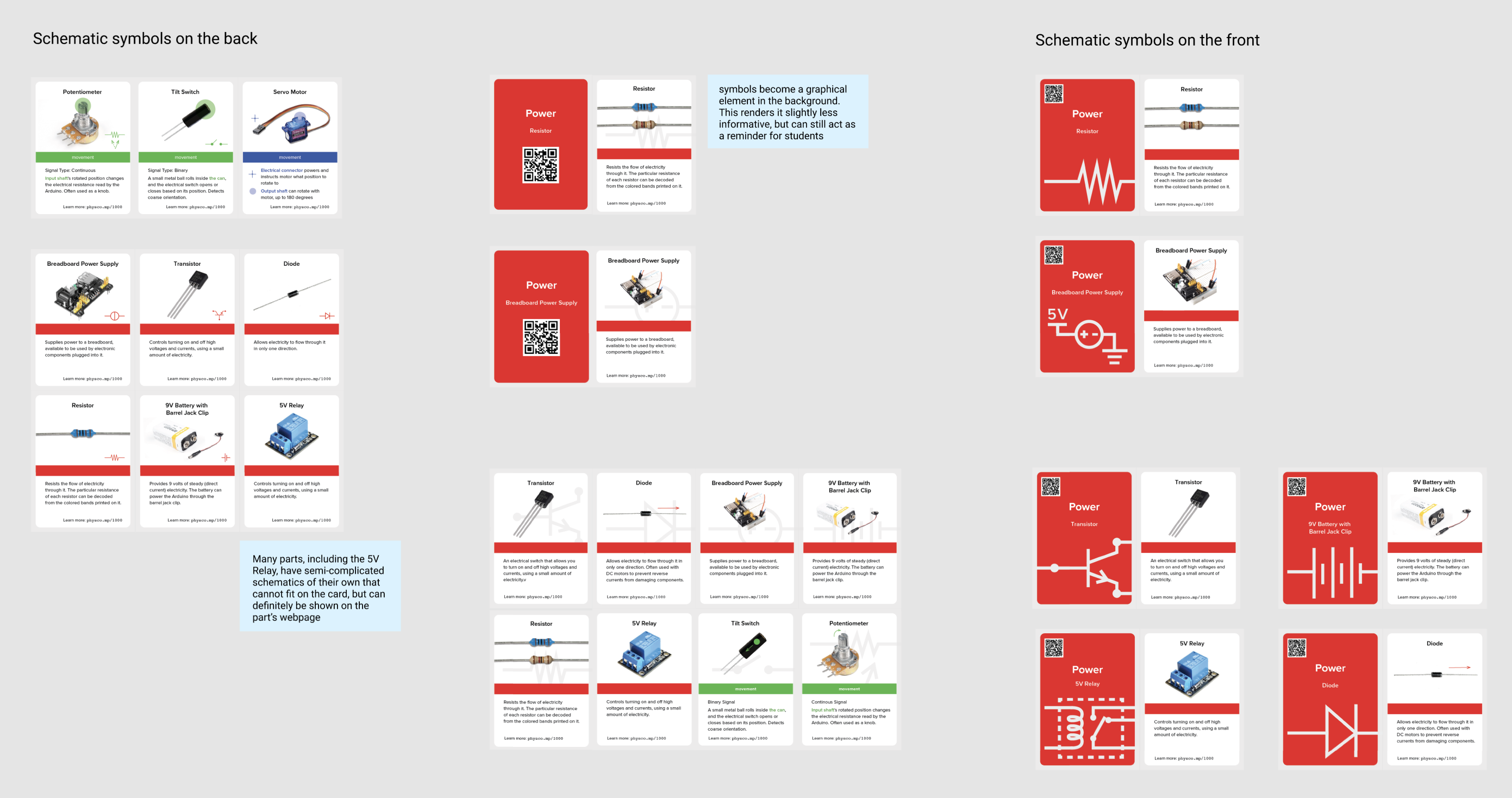 NEXT STEPS
We are currently deploying MakerCards in two additional sections of 99-355 Intro to Arduino. We are also planning a workshop with instructors of other maker-based learning courses to hear their thoughts on this tool.

MakerCards is being submitted to DIS2021! Check back soon for the full paper.